LIVE AND ON THE AIR 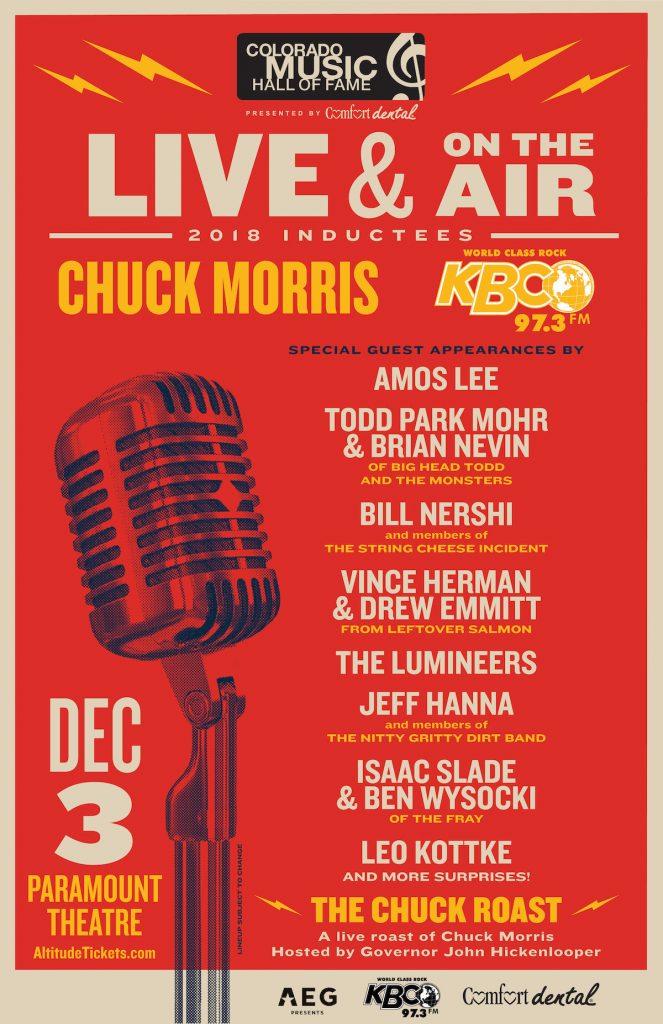 “LIVE AND ON THE AIR”

What began as a modest, 250-watt signal booming out of the little town of Boulder (with a population of under 70,000 at the time) had, 42 years later, turned into the nationally known 97.3 KBCO World Class Rock. In the process, KBCO set the standards and benchmarks that every Adult Rock station strives for: creativity balanced with radio fundamentals and commitment to the local community that led to long-term success. And KBCO was also the founding station of the Adult Album Alternative (or Triple A) format that to this day holds its annual convention in Boulder. 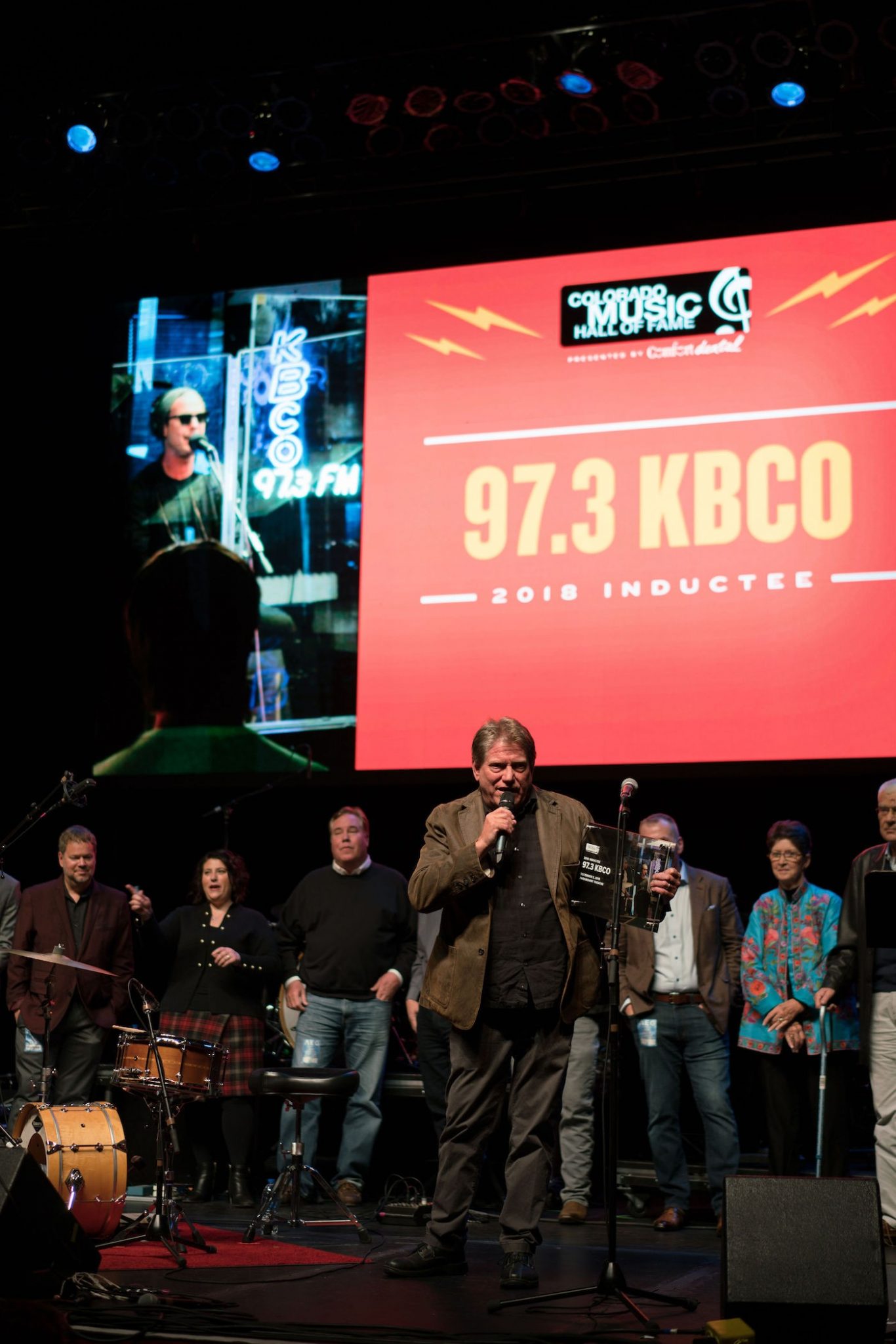 Back in the ‘60s, a radio fan named Bob Greenlee graduated from Iowa State with a dream to own a radio station. His search led him to Boulder where, in 1975, Bob and his wife, Diane, bought KADE-AM. But Bob knew that FM radio was where he really needed to be, and by the end of 1976, the Greenlees had purchased a 1000-watt FM station, KRNW, that had a loyal following in the progressive college community. The signal also happened to come with a Class C license, allowing an upgrade to 100,000-watts. 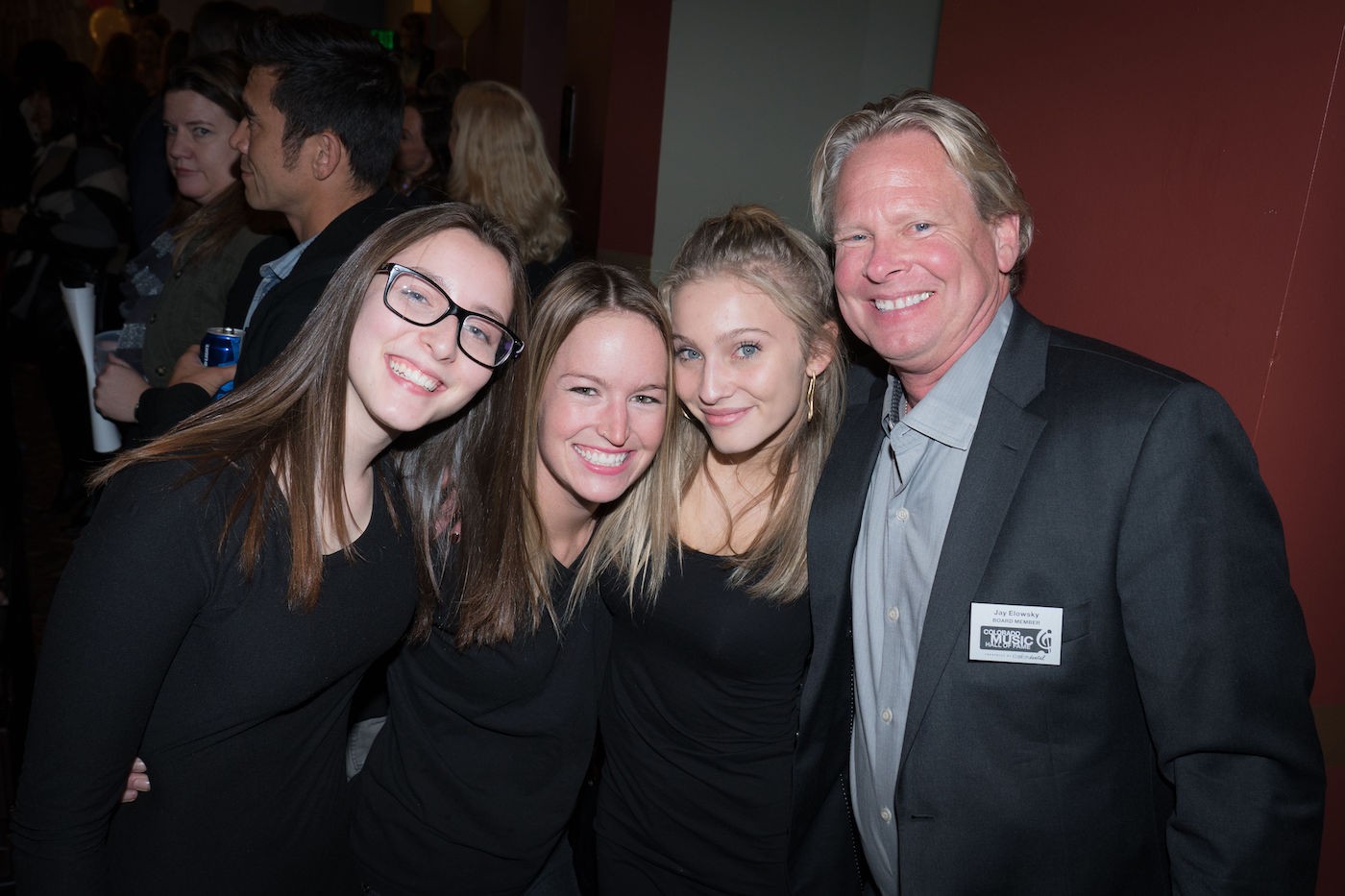 The original vision was to create a music station that reflected the unique population of Boulder, and the call letters were changed to KBCO for Boulder Colorado. On the air, it was dubbed “Boulder Radio” with a mix of soft, acoustic “Colorado Music.”

By the mid-1980s, KBCO was so successful that the station constructed an antenna that could reach the entire Front Range. The programming vision changed with the expanded audience, as KBCO could now embrace the entire Denver market and beyond, expanding the original acoustic music playlist while keeping the unique Boulder image. And it worked: By the winter of 1988, KBCO was the #1 rated station in the Denver radio market. 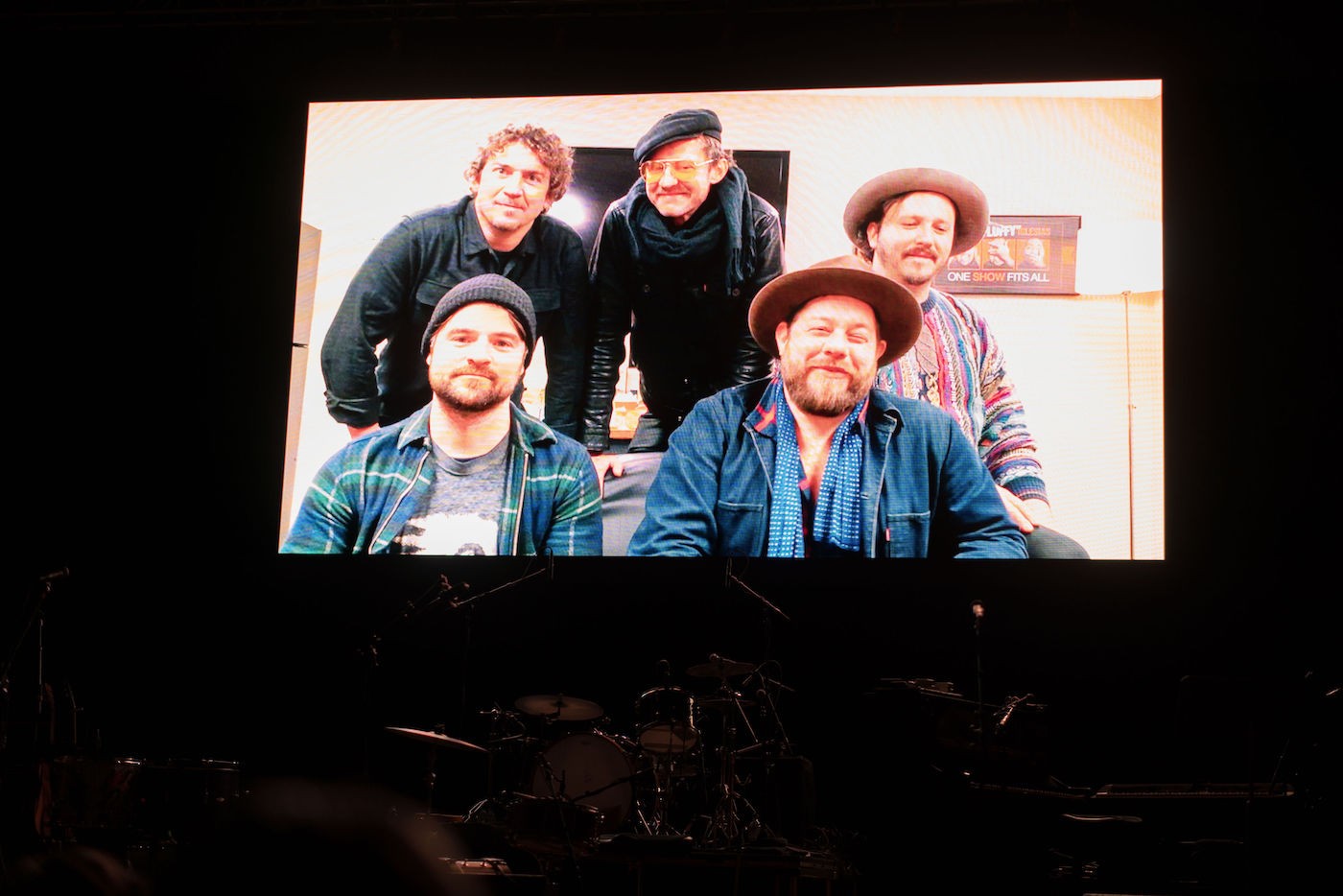 KBCO always embraced the fun Colorado lifestyle. Boulder was and is a bicycle town, and in 1980 KBCO launched the Kinetic Sculpture Challenge: a competition of human-powered amphibious crafts made from bicycle parts and whatever else was available. The teams raced through mud, down dirt roads and over water at the Boulder Reservoir. For the winter, KBCO created the Cardboard Derby. Contestants created their crafts out of cardboard boxes and raced them down the slopes at local ski resorts. At the same time, the “I Ski with KBCO” program offered discount ski weekends, bringing hundreds of KBCO listeners together to do what Coloradans love most in winter…skiing and riding. And KBCO has hosted hundreds of live concert events, from its years presenting the 4th of July fireworks at Folsom Stadium to special performances at small clubs to hundreds of shows at Red Rocks and such venues as the Pepsi Center and Fiddler’s Green. 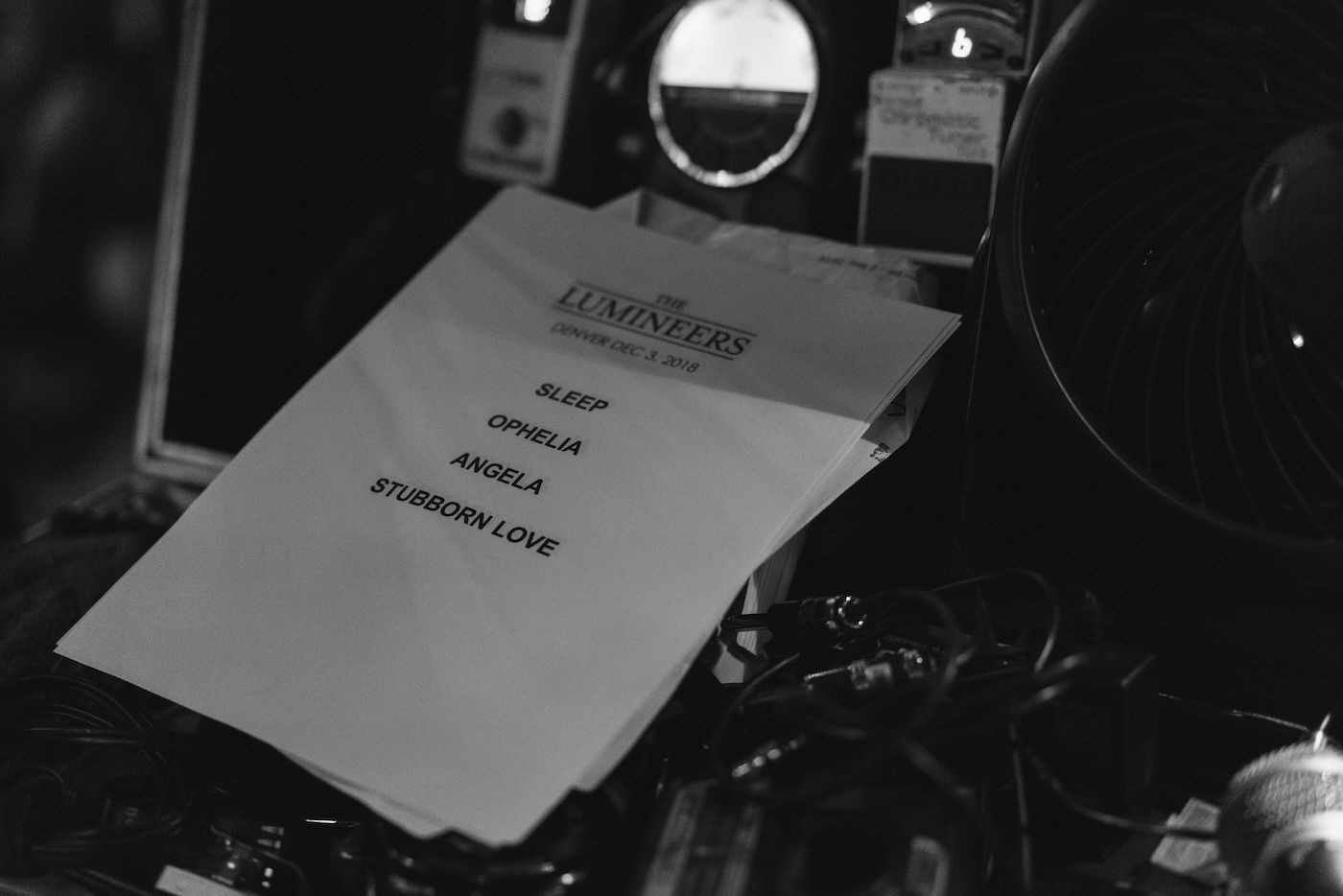 Over the past thirty years, the top names in music have performed live on-air in KBCO’s Studio C. Dave Matthews, Sting, Stevie Nicks, Robert Plant, Mumford and Sons, Imagine Dragons, Ed Sheeran and hundreds more have recorded unique and often cutting-edge performances at the station. Studio C is a regular stop for up-and-coming artists, who play there for their fans and the exposure … and the opportunity to be included on the annual CD that the station releases each December. The idea for the Studio C performances came when Melissa Ethridge brought her acoustic guitar into the station so that it would not be exposed to the elements. She did an impromptu on-air performance in one of the station’s small editing studios called, “Studio C.” It’s now developed into one of the best live recording and broadcast studios in the country. 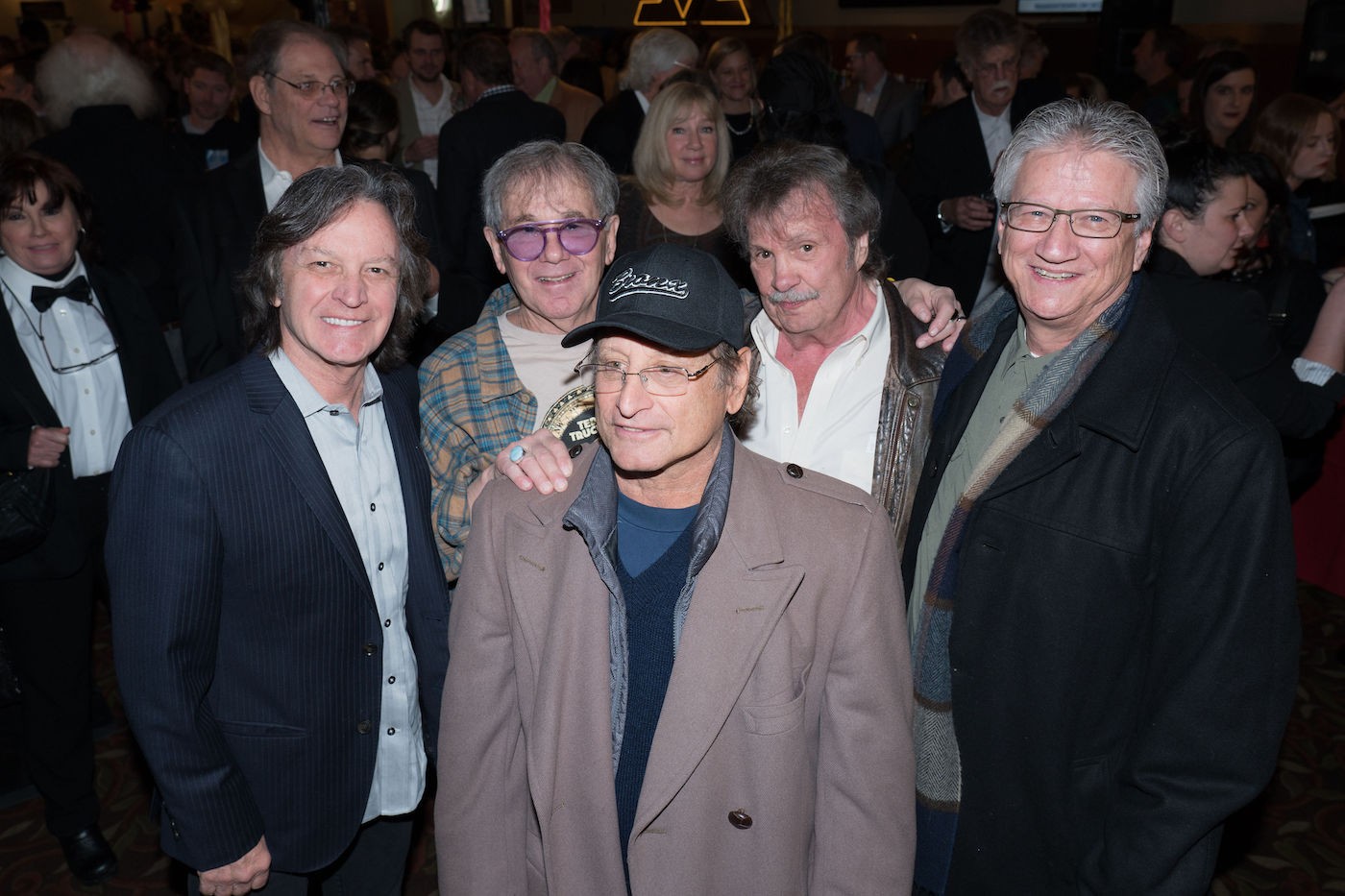 Before streaming – when CDs were the way we bought music – 30,000 copies of the popular KBCO Studio C Series would sell out in 4 hours. And in December 2018 KBCO Studio C celebrated their 30th Anniversary with a special 2 CD set that contained some of the best music ever preformed live on the radio. The KBCO Studio C CDs have raised hundreds of thousands of dollars for the Boulder County AIDS Project and the Food Bank of the Rockies. 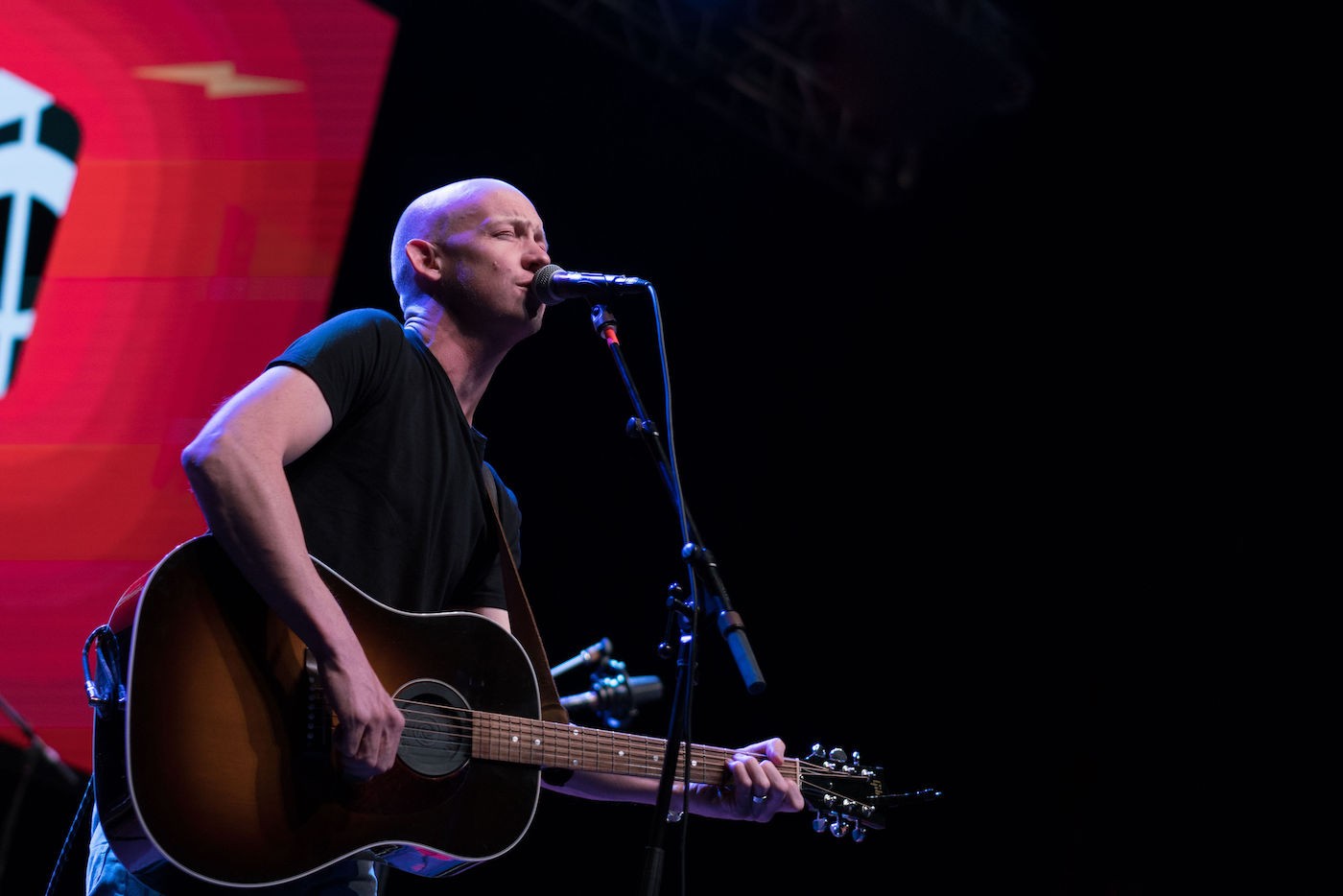 KBCO’s dedication to Colorado music and musicians comes to life in there ‘Local Edition’ program airing weekly for more than 30 years – giving a voice to the local music community. In 2004, the KBCO Local Edition CD featured local artists recorded live in KBCO Studio C to benefit Music Education in the Denver Public Schools. And in keeping with the times, a vinyl album version of local Colorado musicians recorded live at KBCO supported the Colorado Music Hall of Fame’s move to Red Rocks. Through the years KBCO has showcased local artists right alongside the national acts released on the Studio C CD series. 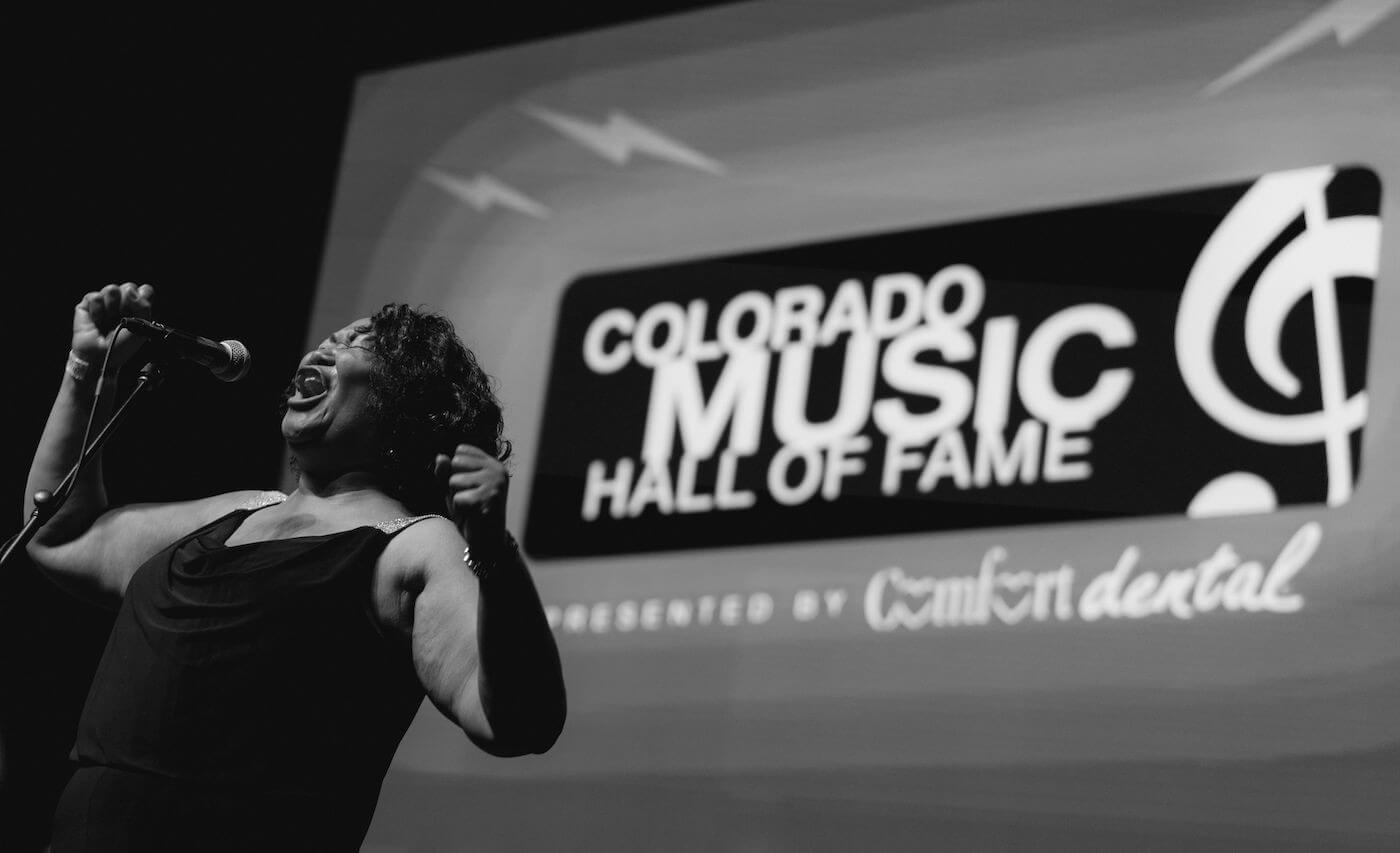 Radio has changed. In 1977 there was no internet, streaming, cell phones or ear-buds. Today radio is takings on new exciting roles in the digital world and in our community. Now, radio is only one of many outlets for music fans to find out about new artists. The business of radio has changed in the past 40 years as well. When Bob and Diane Greenlee bought KBCO they were only allowed, by law, to own 2 stations in any given marketplace. Today companies can own up to 8 stations per market in many different markets. 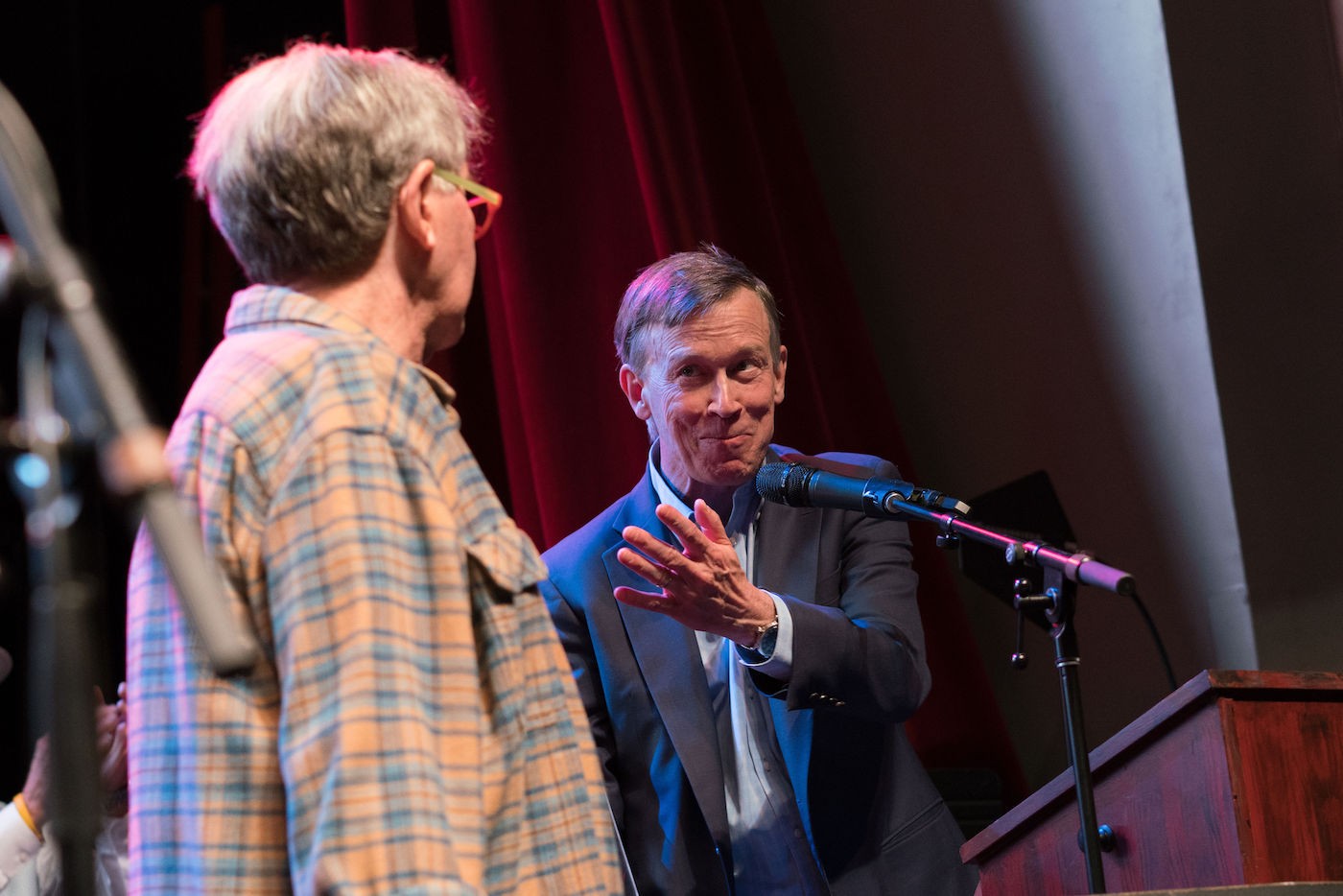 KBCO navigated the waters of corporate buyouts and management changes to keep KBCO relevant and supportive of the local community. KBCO keeps us informed, laughing through the traffic and giving us access to the best new songs mixed with a wide variety of music spanning many decades. The station remains the essential outlet for any artist who wants to build a fan-base of loyal music fans, concertgoers and supporters of the band. 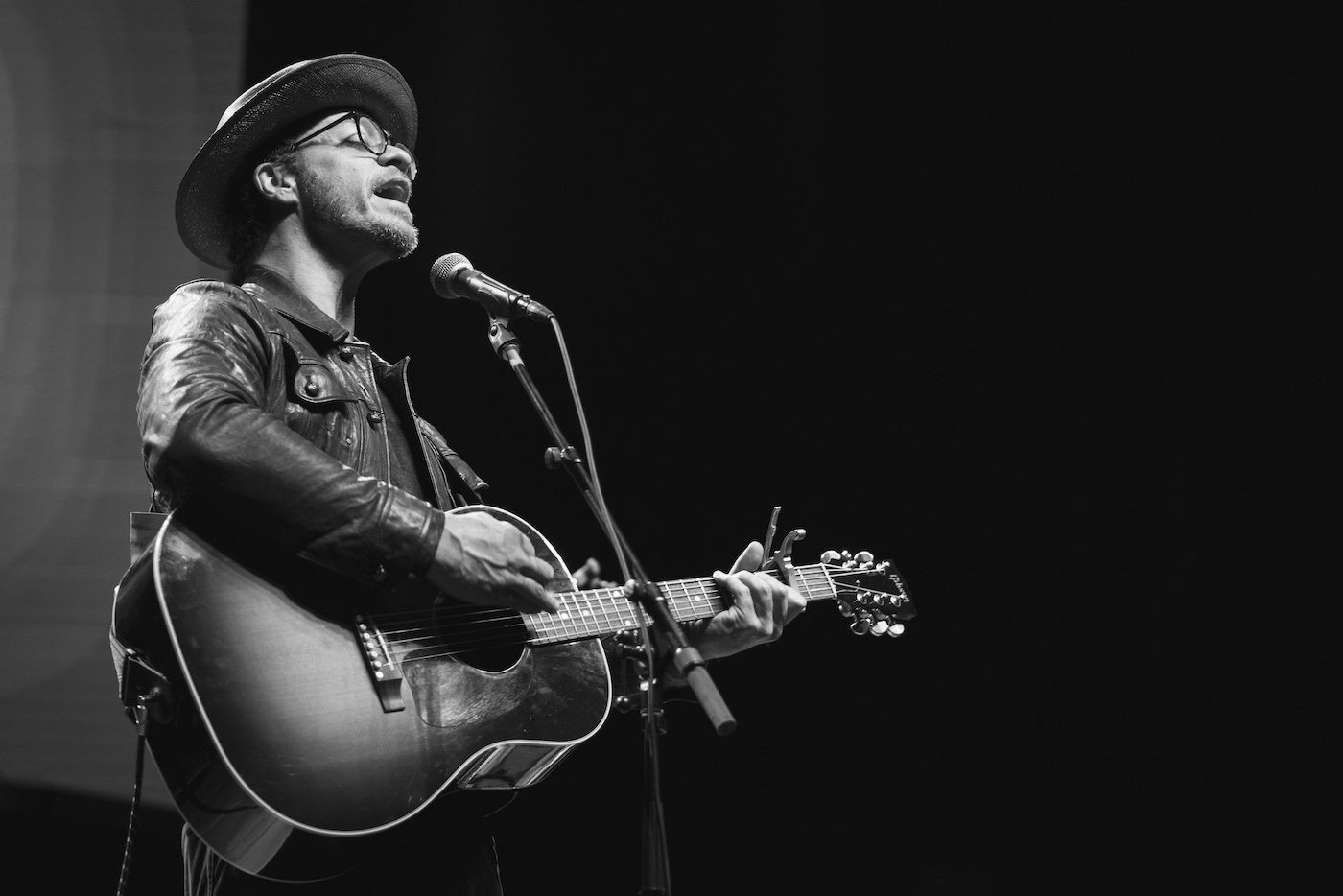 The Triple A format has morphed into a collection of mostly noncommercial radio stations across the country. But with the incredible heritage, loyalty and dedication of the KBCO staff of the past 4 decades; the loyalty and unbridled enthusiasm of the Colorado music fans who feel a personal connection to DJs like Ginger, Keefer, Bret, Scott and all the on-air staff; KBCO remains by far the most successful station of them all. For over 40 years KBCO has provided the music of several generations – the music of our lives. The Colorado Music Hall of Fame is proud to induct 97.3 KBCO for their incredible contribution to Colorado Music

John Hickenlooper was a music fan long before he became a successful brewpub owner, much less a popular politician. And as mayor of Denver and then governor of Colorado, no one did more to support this state’s music scene than John Hickenlooper.

“I have never known a politician so involved and caring of the Colorado music community as John,” says promoter Chuck Morris, who honored Hickenlooper with the Barry Fey Visionary Award at the December 2018 ceremony where Morris himself was inducted into the Colorado Music Hall of Fame. “When tragedies like the Boulder floods and fires hit, John was there, helping us reach out to artists to come and perform, helping get donations from corporations and literally emceeing and partaking in the events themselves.” 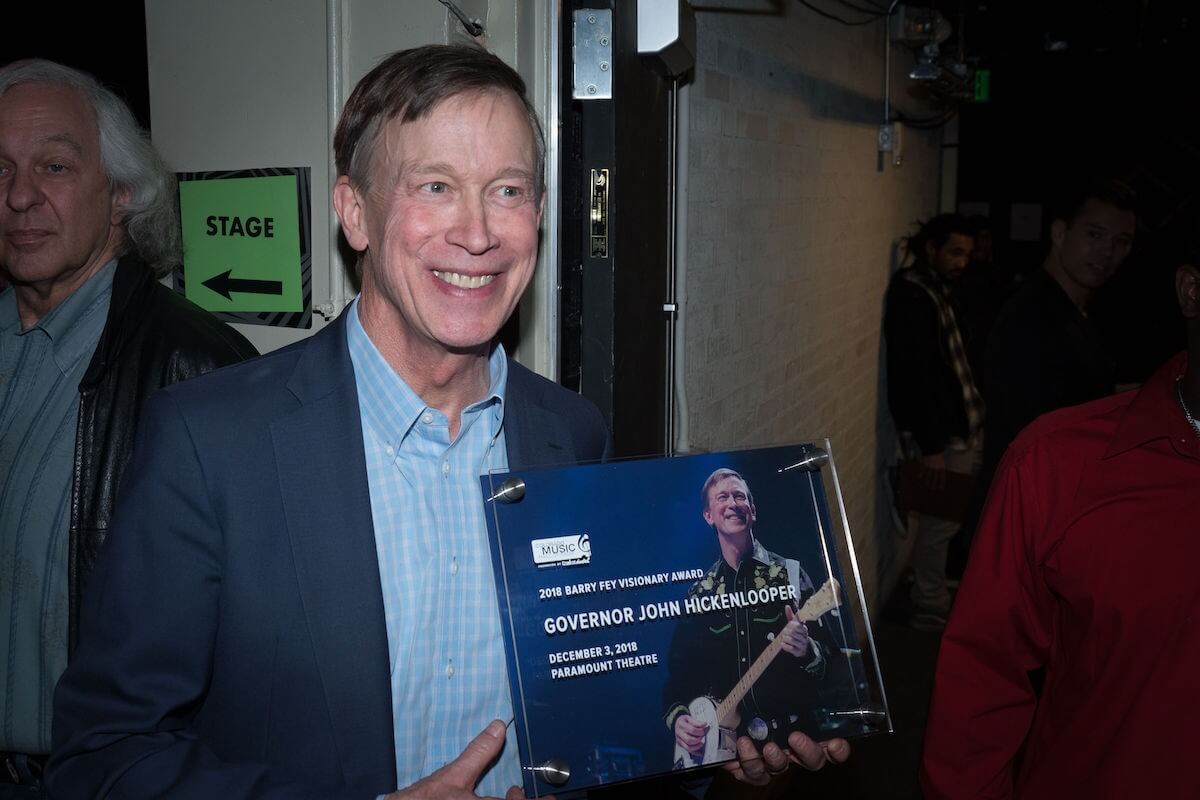 In his push to elevate Colorado’s music industry, Hickenlooper did not just respond to emergency requests. As mayor of Denver, he helped propel Red Rocks Amphitheatre to its top-tier status, tripling the number of shows at this legendary venue to more than 100 a year. He used property tax discounts to encourage live music downtown, and today Denver rivals Nashville and Austin for the number of spots booking music. He also worked with established organizations like the Colorado Symphony and Swallow Hill so that they landed on solid footing. And certainly, one of his lasting legacies as governor is Take Note Colorado, a statewide initiative he introduced to provide access to musical instruments and instruction to every K‑12 student in Colorado.

Hickenlooper’s support of the scene has earned him many fans, including musicians themselves. “Old Crow Medicine Show, The Lumineers, One Republic, Nathaniel Rateliff, The Fray, Bonnie Raitt and Dave Mathews are only a few of the acts that he calls friends, and he is usually seen when they appear in our great city,” Morris adds. “My favorite story is when the Denver Art Museum called me to get a band to surprise him when John was awarded the Man of the Year at its 2019 gala. It took five seconds of asking The Avetts to fly all the way from North Carolina and surprise John with a beautiful show to end the evening. The look on John’s face was priceless. If there is one person who personifies the greatness of Colorado music for the last 25 years, it would be hard to top John Hickenlooper.”

Governor John Hickenlooper was honored with the Barry Fey Visionary Award at the December 2018 induction ceremony for the Colorado Music Hall of Fame.