Born in Brooklyn, Morris found his passion for music ignited by a Kingston Trio concert at New York’s Lake Chautauqua in 1957. He launched his fifty-year career in concert promotion and artist management when he dropped out of a University of Colorado Ph.D. program in 1968 to manage the Sink, an iconic college hangout on Boulder’s University Hill, for friend and owner Herbie Kauvar. Morris started to book local bands—Flash Cadillac, Tommy Bolin, Magic Music—and the rest is history! In 1970, Morris and Kauvar acquired Tulagi, another Boulder venue that had built a national reputation. Morris booked a blend of up-and-comers, including the Eagles, Linda Ronstadt, ZZ Top and Bonnie Raitt, plus a mix of blues, folk and country legends like Muddy Waters, Doc Watson, Earl Scruggs and Leo Kottke. 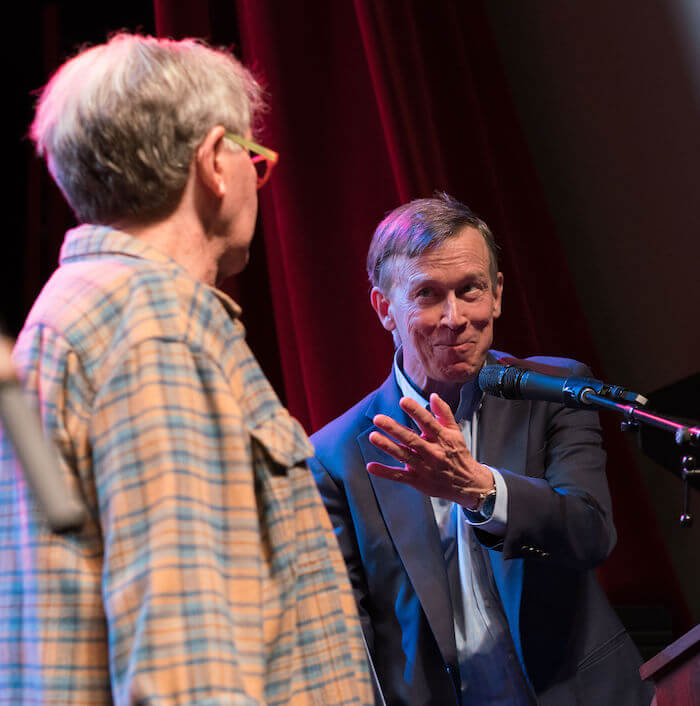 Morris moved beyond Boulder in the early 1970s, when he began a long partnership with powerhouse Denver concert promoter Barry Fey.

Morris, Fey and Fey’s wife, Cindy, launched Ebbets Field, an intimate club named after the fabled Brooklyn Dodgers stadium. Though Ebbets lasted just a few years, it was regularly filled beyond capacity as Morris snagged then-burgeoning music superstars like Lynyrd Skynyrd, Little Feat and Herbie Hancock, plus rising comedians like Richard Pryor and Steve Martin. Morris joined Feyline Presents as senior VP of booking and promotion and helped facilitate the rise of that juggernaut concert company into one of the biggest in the country; he also helped turn Red Rocks Amphitheatre into the country’s most popular outdoor venue. In the 1980s, Morris and Fey collaborated on the Rainbow Music Hall, a 1,458-seat space in Denver that allowed Morris to lure bigger bands and established performers like AC/DC, Bob Dylan and Metallica, plus new artists U2, Blondie and Pat Benatar.

As the Front Range music scene grew, Morris turned his talents to artist management. The Nitty Gritty Dirt Band, Big Head Todd & the Monsters, Leftover Salmon and Lyle Lovett are among those who benefited from his guidance. In the late 1980s, Morris began a long and fruitful friendship with entrepreneur Philip Anschutz when Anschutz approached Morris about having the Nitty Gritty Dirt Band perform at the opening of Anschutz’s Western art collection exhibition in what was then the Soviet Union.

Ready to strike out on his own, Morris left Feyline Presents (while remaining a consultant for several years) and allied his promotion expertise with the company founded by the legendary Bill Graham. In the late 1990s, they purchased and redeveloped Denver’s Fillmore Auditorium, which shares its name with the storied San Francisco venue that Graham helped make famous. Bill Graham Presents/Chuck Morris Presents was eventually acquired by SFX Entertainment and ultimately became Live Nation, which Morris continued to run.

In 2007 Morris joined Anschutz’s AEG as president-CEO of AEG Presents Rocky Mountains, the largest concert promotion entity in the region. Morris led the renovation of Fiddler’s Green, a 17,000-seat outdoor amphitheater in south Denver; the creation of 1STBANK Center, a 6,500-seat facility in Broomfield; and the development of the Mission Ballroom, a 60,000-square-foot space in Denver’s hip RiNo Arts District that opened in 2019.

Outside of his music-industry interests, Morris has been recognized for his philanthropic work. He is a longtime supporter of the Denver Health Foundation, Make-A-Wish Foundation, Denver Dumb Friends League, American Transplant Foundation and University of Colorado Foundation, among many more organizations.

The Colorado Music Hall of Fame was proud to induct Chuck Morris into the Hall on December 3, 2018.