Coming out of the fluid California scene of the late 1960s, the Nitty Gritty Dirt Band hit upon a unique Americana style. The combination of Jeff Hanna and Jimmy Ibbotson’s acoustic guitars and brother-like harmonies with John McEuen’s string wizardry, Jimmie Fadden’s utilitarian prowess and Les Thompson’s mandolin created the sound, and at shows at Denver’s Marvelous Marv’s nightclub in early 1970, the band played to enthusiastic crowds.

In 1971, the band left Los Angeles to relocate in the Colorado mountains, with the members settling into their respective wooded communities.

The two musicians consented to take part in recording a selection of traditional country numbers, with the band allowing the spotlight to fall on the old masters who had greatly influenced them. The resulting album, Will the Circle Be Unbroken—an unprecedented, groundbreaking three-LP set, recorded two-track live, with no mixing or overdubs—elicited appreciation from both rock and country listeners. It even earned a gold album, the first for Scruggs, Watson, Maybelle Carter, Jimmy Martin, Roy Acuff and others.

Circle was ultimately inducted into the Library of Congress as “one of America’s most important recordings.”

In 1977, the Nitty Gritty Dirt Band became the first American group selected by the Soviet government to tour the USSR. The band spent a month in Russia, Armenia, Georgia and Latvia playing to sold-out audiences, with an estimated 145 million people tuning in to the group’s one-hour performance on Moscow television. The following years saw members come and go. Bob Carpenter, based in Aspen with the band Starwood, became an invaluable addition on keyboards and vocals. The back-to-back hits “Make a Little Magic” and “An American Dream” with Linda Ronstadt were released under the name the Dirt Band.

“Colorado Christmas,” recorded in 1983, has remained a radio staple around the holidays. In 1986, a 20-year anniversary concert at McNichols Arena in Denver was a sell-out, with guests such as Ricky Skaggs, Emmylou Harris, Doc Watson, John Prine and others. The Nitty Gritty Dirt Band continues to record and tour, and Hanna, Fadden, Carpenter and McEuen celebrated “50 Years of Dirt” in 2016.

Steve Martin learned the banjo with help from high school friend John McEuen, and the instrument became a staple of the young comic’s standup career. Martin performed at Tulagi in Boulder and Ebbets Field in Denver, then discovered the charms of Aspen and rented a home there. By 1978, the Colorado transplant had earned the level of commercial success reserved for rock stars. The second side of his comedy album A Wild and Crazy Guy was recorded at Red Rocks Amphitheatre; it reached No. 2 on Billboard’s Pop Albums chart, was certified double platinum and won a Grammy Award.

A Wild and Crazy Guy contained the novelty single “King Tut,” performed by Martin and the Toot Uncommons — actually Jeff Hanna and other members of the Nitty Gritty Dirt Band camp. Produced by William McEuen at his Aspen Recording Society studio, “King Tut” sold over a million copies. 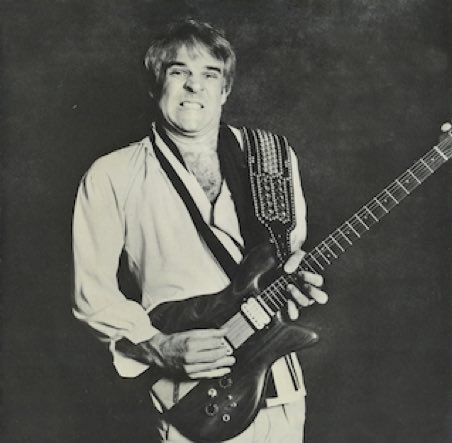 “Colorado Christmas,” recorded in 1983, has remained a radio staple around the holidays.