The History of the Grateful Dead in the High Country 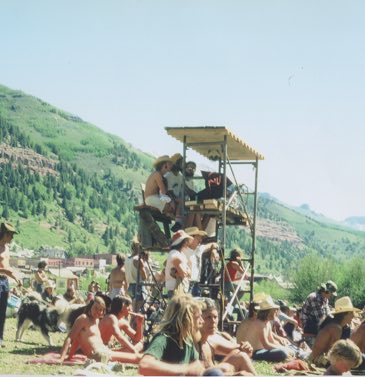 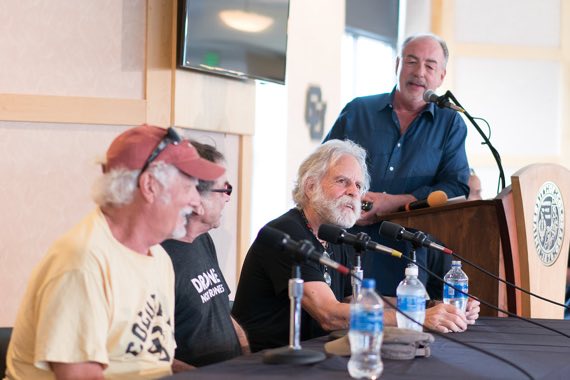 After opening remarks, renowned Grateful Dead authority David Gans (“The Grateful Dead Hour“) performed a few songs in tribute to the band, then moderated a panel of Paul, Grammy winner David Glasser (Airshow Mastering) and promoter Don Strasburg (special thanks to Don and chairman Chuck Morris for working with band management on CMHOF’s behalf). Celebrity Deadhead Bill Walton made an appearance and graciously posed for pictures and signed autographs.

The three original members of the Grateful Dead—Bob Weir, Mickey Hart, and Bill Kreutzmann—arrived and offered their good-natured insights into the band’s defining events in Colorado. Fans were over the moon! The afternoon ended with the distribution of “swag” envelopes containing a “Red Rocks 7/8/78” 3-CD set and commemorative comic, menu and postcards. The attendees then got to see a wonderful performance by Dead & Co. in their club level seats.

The silent auction figures are being tallied, but Colorado Music Hall of Fame made well over $6,000. The Jerry Garcia etching of “The Guys” fetched $3,500, and Scramble Campbell’s donated painting of the Dead at Red Rocks was sold for $1,500.

Lots of people helped to make this event a special Thank you to all involved.

Deadheads: continue to live That Way and dress Like That!

The psychedelic era is ancient history, and LSD is so far out of fashion that it probably doesn’t even need to be illegal anymore.
But still you see them — people with shamelessly dated tastes in footwear who shop in the wrong places and dress themselves in impolitely colorful tie-dyed t-shirts overprinted with images of grinning skeletons sporting garlands of roses.

A large subclass of the Last of the Hippies are Deadheads — these stringy-haired anachronisms who make the Grateful Dead their household religion and more or less organize their lives around their devotions. Grace Slick was right about Dead concerts being where the hippies went, but it’s also true that that’s where the hippies come from these days. You might think the Love Children are as rare as clean air and condors in the hostile, Hell-in-a-bucket environs of post-Me Generation America, but there are lots of people who have continued to live That Way and Dress Like That since the days when saving the world with love seemed like a viable aim in life to many. And furthermore, thousands who were still unborn or still in diapers when the members of the Grateful Dead first started playing together nearly two decades ago are being initiated, learning the tribal arts and the laws of diet and hygiene which have been lovingly preserved and handed down since the Summer of Love.

Seen through Eighties eyes, the hippies are an odd but not wholly unenviable lot. Sure, they sport unfashionably optimistic and/or fatalistic world-views, furnish their lives in Low-Rent rather than High-Tech (except, of course, for their stereos), and work at jobs rather than professions or careers so they can unplug from employment and/or residence any time they want to hit the road with the Grateful Dead. But while mainstream America has lowered its expectations and tightened its belt, a lot of hippies aren’t sweating it: their material expectations are already pretty close to the ground — and many of them don’t wear belts. 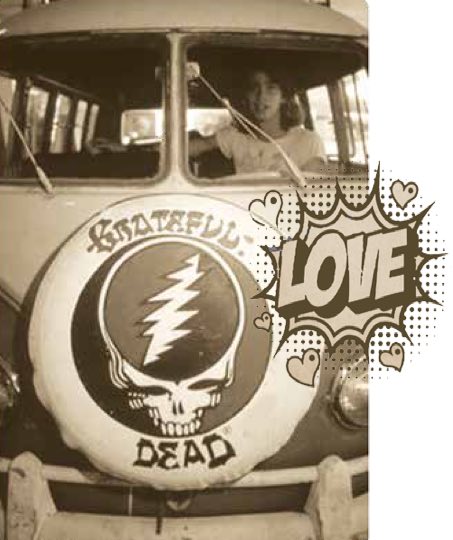 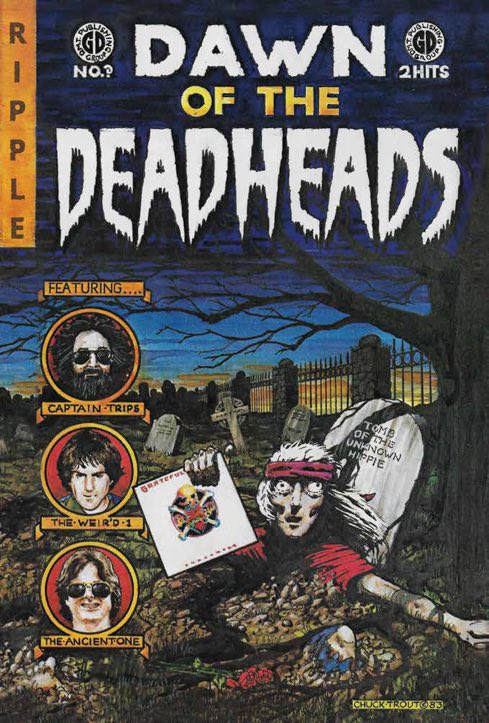 More importantly, the Deadheads have a community — a real and widespread network of people who take care of each other — and that’s something precious few modern Americans can say. The most visible Deadheads are the ones who fly their freak flags proudly. But there are plenty of them who fly it on the inside, who participate more fully in mainstream society and economy.

Although the most visible of the Dead’s audience may appear at first glance to be little more than a blissed-out throng of hippies, there are plenty of Deadheads you wouldn’t mind being seen riding in a car with and with whom you can have meaningful conversations on subjects ranging well beyond their plans for the New Year’s shows or the quality of the pot they just got. Believe it or not, there are Deadheads who go in for grand opera; hell, there’s even a member of the Dead who’s into opera! There are Deadheads who hold responsible positions in the legal, medical, electronics, educa.tion and other fields. There are Dead.heads who play tennis, live in fine homes, don’t smoke pot, and know what things like T-Bills and Capital Gains are all about. There are Deadheads who drive BMW’s, eat sushi and wear alligator shirts; hell, there’s even a member of the Dead who wears alligator shirts!

There are Deadheads who make their livings from creative pursuits more closely linked to the Index of Leading Economic Indicators than to the Deadheads’ own counter-economy of herbs, clothing jewelry and religious supplies. These people see the Dead as an inspiration for their own work. There are some rock writers — myself included — who have Grateful Dead t-shirts in our closets between the obligatory tweed jackets and still man.age to deal with other musics objectively. There are Deadhead actors, scientists, software designers, artists — even dentists and veterinarians — who function more or less normally most of the time. Hell, there’s even a member of the Dead who functions more or less normally most of the time! The Grateful Dead is everything to some people, and that’s probably as unfortunate as any other kind of obsession. But for most Deadheads, a concert is some.thing to help keep life from getting too dull or too serious — an escape valve and a bright spot on the calendar.

There’s more to it than just music,

obviously, but everything about the Deadhead phenomenon stems from the music, and it eventually comes back to that: never mind the giant videos and smoke bombs, man — just play the music. Aside from surface similarities, a Grateful Dead gig has very little in common with a typical rock concert. There are guitars, keyboards, drums, amplifiers and speakers, of course, but this is definitely a case of looks like a duck, walks like a duck, barks like a dog: no flash pots, no tortured castrati front men in an leather union suit shrieking breathlessly about how “It sure is good to be back in [local reference] again! You guys are the best audience on the tour!” What the Grateful Dead do is perform different songs from show to show (their active repertoire is nearly a hundred songs strong), and play each song differently from show to show. The stately pace of a Dead concert is more like baseball than the hyperactive, aggressive tempo of football or heavy metal. It’s music that suggests rather than insists, that asks rather than declares. This isn’t the kind of band that’d be satisfied putting on a pat, pre.pared show with all its peaks and lulls in place; this isn’t the kind of audience that would appreciate such an attitude.